The research network World Values Survey has explored people's values since the 1980s in six waves of interviews in a total of 100 countries. The latest survey was completed in 2014 and the result has been presented in the form of a cultural map in which Sweden is pointed out as extreme. What does that mean?

The cultural map is a summary of some of the questions in the extensive questionnaire used in the study, which have been converted into two scales. One of the scales measures how we consider life, from mere survival to personal fulfillment, and the other scale goes from religious values and respect for authority to secular and rational values. The cultural map shows which countries are close in terms of values, regardless of geography. This is for example why Sweden is closer to Japan than to Switzerland in some respects. 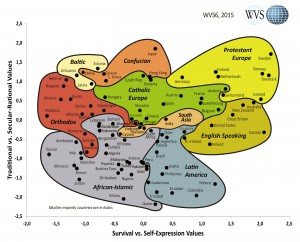 In the cultural map from 2015 Sweden can be found in the top right corner, close to Norway and Denmark. Most countries have moved in this direction during the thirty years that WVS have existed. Sweden's position in the map tells us for example that God has no natural place in our everyday lives, that we are not questioning homosexuality or abortion, and that we trust others.

What does this really mean? Well, it means that when meeting people from other parts of the world, we should be aware that what Swedes think is right and wrong can seem quite extreme. Sweden is not a country with "normal" values, since what is considered normal can differ greatly between countries.

According to Bi Puranen, Secretary General of the World Values Survey, this is something that the industry is already well aware of since cultural clashes can be bad for business. However, the interest for the differences in values among countries has also increased among ordinary citizens in recent times. When meeting people from other parts of the world, through media, internet and travelling, it becomes increasingly important for us to understand why we do what we do, and why others do differently.

It is perhaps when talking about what is taboo in different countries that this becomes most clear. What is considered unacceptable in one country can be totally normal in another.  In Sweden, for example, we have few problems with homosexuality or premarital sex, but we react strongly when a parent hits a child, or a man his wife. In many countries the situation is the reverse.

World Values Survey encompasses a lot of questions that are not included in the cultural map. There are questions about family, work, religion, culture, aging, politics, science, violence, and future. All data is available for anyone to analyse on the WVS website.

Want to know more about the results of the latest poll?
Find cultural maps from the last three polls on this website
Try the Online Analysis tool on the WVS website