The World Values ​​Survey (WVS) is a worldwide network of researchers studying values ​​and their impact on social and political life. The network mainly collects data on people's values ​​via extensive surveys among representative samples of nearly 90 per cent of the world's population.

To the mWVS workplace survey >

WVS is a non-profit association governed by a board. This board includes the secretary general Bi Puranen, who is also a researcher at the Institute for Futures Studies. The organization is led by Christian Haerpfer (president), professor of political science. A broadly composed international Scientific Advisory Board serves as a guiding principle in research ethics. The research network is organized in national teams, each of which seeks funding for the surveys made in their respective countries.

The World Values ​​Survey runs an ongoing social science research project with the aim of exploring socio-cultural, moral, religious and political values ​​in different cultures around the world. WVS has conducted representative national surveys in 97 countries covering almost 90 percent of the world's population. The surveys are conducted in the form of face to face interviews, in very poor, as well as very rich countries, in authoritarian systems and liberal democracies, covering all important cultural areas.

The survey studies are carried out on an ongoing basis with a few years' intervals, so-called 'waves', and the number of countries included has increased over time. The first wave was conducted during the period 1981–1984, the seventh wave will be finished in 2019.

The WVS questionnaire consists of about 250 questions, which results in 400–800 measurable variables. Data from all waves are available in an open database which is used by researchers, but also by public authorities, organizations and companies. Another important target group is young people at upper secondary and university level. More than one million people download data from the website every year. On the website you can also find a web-based tool with which you can do simple analyzes without downloading data.

WVS has been able to show that people's values ​​are of great importance for economic development, the development of democratic institutions, gender equality and the extent to which a society is effectively governed. The so-called cultural map, developed by the researchers Ronald Inglehart and Christian Welzel, is a way of visualizing this. Inglehart and Welzel claim that one can explain cultural differences in the world by using two scales based on a selection of the questions asked in the questionnaire. 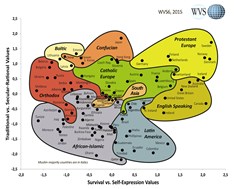 One of the scales (the x-axis in the diagram) measures the view of life in a ranking from pure survival to quality of life, trust and self-realization. The second scale (the y-axis of the chart) measures traditional values ​​where religious beliefs and respect for authorities have low values, and secular, rational values end up higher up the scale.

Results from the last four waves

Download pictures showing how different countries are placed in the map according to results from the last four waves. Note that the maps are manually drawn and therefore approximate.

The values tend to vary over time, which is visible in this short animation which includes the first three waves.

Find more information about the World Values Survey, data and ongoing updates on the current wave at  worldvaluessurvey.org

At the Institute for Futures Studies, the researchers often use data from the WVS. Read more about current research projects on values ​here.