Population growth - how great are the risks and what factors affect risk levels? 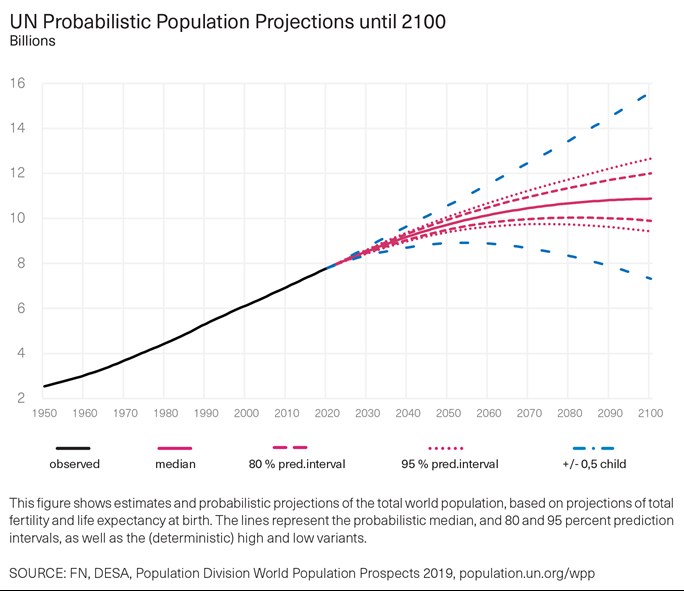 The global population has increased dramatically since the year 1900 from approximately 1,6 billion to today's 8 billion. The UN estimates that world population will reach 11 billion by the year 2100. A larger human population will—all else equal—place greater stress on most ecological systems and may have adverse consequences for human welfare, and the welfare of future generations. But how great are the risks of a growing population? What is at stake and what factors affect the risk levels? Read the new Policy Paper Global population growth by Martin Kolk, Gustaf Arrhenius, Malcolm Fairbrother and Joe Roussos.

The authors are all researchers in the project Sustainable population in the time of climate change at the Institute for Futures Studies. The Policy Paper is also a part of the 2022 report on global catastrophic risks, A Year of Colliding Consequences – The Global Catastrophic Risks Report 2022, published by Global Challenges Foundation.

A large and growing population can interact with other risks, for example those related to ecological collapse. Population growth can thus contribute to the destruction of humanity's long term potential, which makes it an existential risk in a weak sense, writes the researchers:

"It is not, however, an existential risk in its strict sense: A risk “… that threatens the premature extinction of Earth originating intelligent life". While population growth will not, in itself, threaten our ability to feed a global population or put at risk current civilization, if the global population grows more quickly than societies can adapt, we and future generations may be confronted with very difficult trade-offs, and irreparable harm to the biosphere."

The global population has grown from around 1.7 billion in the 1950s, to nearly 8 billion today, and is forecasted to reach around 11 billion in 2100. The growth rate for the total human population peaked at around 2 percent per year in the 1960s and is around 1 percent today. The rate is forecasted to decline to the point where is no growth in around 2100. Most of the future population growth will take place in Sub-Saharan Africa, while most of the growth since the 1950s took place in Asia.

The researchers identify three factors that affects the risk level:

A Year of Colliding Consequences – The Global Catastrophic Risks Report 2022