We are saddened to announce that the founding president of the World Values Survey, Ron F Inglehart passed away on Saturday 8 of May. He was the president of the World Values Survey Association (WVS) from 1988 till 2013. He taught political science from 1966 to 2021 at the University of Michigan in Ann Arbor, where he was the Professor of Democracy, Democratization and Human Rights, and Research Professor Emeritus at the Institute for Social Research. Ron was one of the top three most cited political scientists in the world – he published over 400 peer-reviewed articles during his career, and authored or coauthored fourteen books. His research was highly respected and he received several honorary degrees at renowned universities – among them Uppsala University in 2009, from which he also was the co-recipient of the 2011 Johan Skytte Prize in Political Science.

Already in the early 70’s, Ron proposed a theory of value change, predicting that value priorities in advanced industrial societies would tend to shift away from “Materialist” concerns about economic and physical security, toward a greater emphasis on self-expression, freedom and the quality of life – something he dubbed “Post-materialist” values. The theory was loosely based on the Maslow`s psychological needs theory from 1954, which distinguishes between physiological needs and higher-ordered self-actualization needs.

According to Ron’s value change theory, “Materialist” goals, are still valued, but they are no longer the top priority for a growing number of people in Western societies. On the other hand, one would not expect Post-materialist values to be a major force in pre-industrial societies. However, according to Ron’s value-change thesis, it is potentially a steady, universal process towards democracy and freedom: it should occur in any country that moves from conditions of economic scarcity to existential security. But the process is slow – value change proceeds at a glacial pace because an individual’s basic values reflect the conditions that prevailed during his or hers pre-adult years. Ron used a large body of timeseries survey data from the WVS to confirm the existence of this inter-generational value change process towards post-materialistic values, with its embrace of egalitarian norms, secularization, tolerance of foreigners, gender equality, and tolerance of divorce, homosexuality, and abortion.

Ron argued that the Scandinavian countries are the best examples of this process. I remember how he held his arms up in the shape of a globe: - It is like a train traveling around the globe with the Scandinavian countries with their post-materialistic values as the locomotive. Eventually country by country, nation by nation will hop on the train towards freedom, peace and liberal values, he said with his warm voice and great smile.

To demonstrate these ongoing changes, Ron in collaboration with professor Chris Welzel at the Leuphana University Lueneburg, developed the often cited WVS Cultural Map of the World. This ”cultural map of the world”, based on the theory of value change, depicts cultural values that vary between societies in two dimensions: traditional versus secular-rational values on the vertical y-axis and survival versus self-expression values on the horizontal x-axis. Moving upward on this map reflects the shift from traditional values to secular-rational ones and moving rightward reflects the shift from survival values to self-expression values. Together with Chris he developed an updated version of the value-change theory, the ”Revised Modernization Theory”, in which economic development triggers cultural changes that make individual autonomy, gender equality, and democracy increasingly likely.

In the book ”Sacred and Secular: Religion and Politics Worldwide”, written together with Harvard Professor Pippa Norris, based on data from WVS they argue that religiosity persists most strongly among vulnerable populations, often in poorer nations and in failed states. From the same data they show that in developed countries, the established churches are losing their ability to tell people how to live their lives. Instead spiritual concerns may be becoming increasingly important in these secular societies.

In later years Ron has (also together with Pippa Norris) given an impressive overview of the motives and phenomena of growing global populism.

Ron was a frequent visitor to Sweden and the Institute for Futures Studies, where he held seminars on the latest findings from World Values Survey research. He frankly claimed that with the WVS data he could predict the stability of democracy in a society only by looking at research data of tolerance, trust, political activism, and Post-materialist values. He was also very supportive of our Swedish Migrant World Values Survey (MWVS) endeavor, giving us the possibilities to monitor how values change when migrating. This gives us the possibility to analyze how values and social norms have different trajectories for change depending on the country of origin. In our last conversation on Zoom just a couple of weeks ago, Ron – the always so optimistic and positive supporter and mentor, encouraged us to carry on with our research in the Migrant World Values Survey. He was a great supporter of expanding this branching of WVS to several other countries.

Almost to his last breath, Ron continued to come up with striking findings that caused lots of attention, like his very recent article in Foreign Affairs “Giving Up on God.” His final monograph, which is also very recent, evidences the rapid worldwide decline of religiosity in greater detail.

Ron passed away peacefully on Saturday with his wife Marita and son Ronald Jr by his side. He was 86 years old. 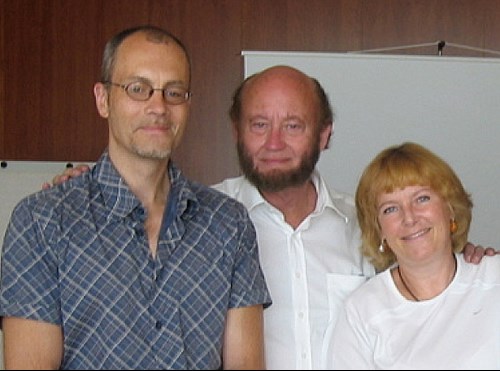