Rethinking society for the 21st century

A couple of weeks ago it was decided that the Institute for Futures Studies will support the project International Panel on Social Progress. It is a large project with high ambitions that mobilizes several hundred scientists from different parts of the world. The goal is set on improving people's living conditions.

The starting point of the project is the perception that there is lack of hope for a just society, in both rich and poor countries. This despite the fact that we have never had more knowledge about how to create a better society. International Panel on Social Progress is about finding a way to disseminate social science research to those designing future policies and institutions.

Interview with Marc Fleurbaey, Professor of Economics, Humanities and Public Affairs at Princeton University, USA, one of the founders. 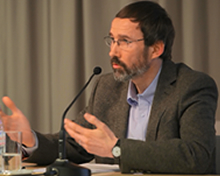 What exactly sparked the initiative, and what was the first step taken in launching the project?
– The idea emerged because of the existence of several reports being published on specific issues like climate change (the IPCC report), happiness (the World Happiness report), whereas nothing really addressed the long term, structural issues about our societies. This is paradoxical because many of our problems find their ultimate causes in social and institutional malfunctions. There would be no climate crisis if vested interests in fossil fuels were not so powerful, there would be no Ebola crisis if minimal health systems were a priority for poor countries and for the world institutions that pretend to help them, and so on. So, the long-term solutions to many of our threats will come from improving our institutions and our social relations.

– The first step in launching the project was simply many conversations between colleagues who examined the idea and found it worth trying! The enthusiasm of the Foundation Maison des Sciences de l'Homme (Michel Wieviorka, Olivier Bouin) was instrumental in giving initial momentum to the initiative. A steering committee was quickly formed on this basis.

According to Marc Fleurbaey, we now have a historical window of opportunity to make a difference. This is due to the combination of three facts: 1) The old utopias are dead and people are now looking for new ideas which are realistic and not attached to fanatic ideologies. 2) Many people are concerned about dangerous challenges: increasing inequalities in some parts of society, unsustainability of our lifestyle and model of development, increasing geopolitical tensions. We need to think about solutions. 3) Social sciences have made enormous progress in the last decades. We know a lot more about what institutions and organizations work and don't work. But not all of that is known and used in the public debates and policy-making.

– We need to explain what we know and make it useful.

What is known about the demand for the report from people outside the academia?
– There is a strong demand for good analysis of the structural features of our societies and the long-term perspectives. The success of intellectuals providing such "stories" is the proof, the most spectacular being Piketty's book recently. But there are many others. In comparison to these brilliant single-authored works, the ambition in our project is to provide an authoritative and comprehensive overview.

– No single brain could write what we are about to write. Our societies are very complex, our social disciplines are very specialized and complex too. Only a large group of experts can now think about the future of society in a convincing way. There should be a great demand for that, from many political and social actors and interested citizens.

The idea is that the final report will be the result of a conversation between scientists and other parts of society. The first draft , which should be completed by summer 2016 , will therefore be disseminated as widely as possible, asking for comments from scholars, experts, political and social actors, and citizens.

How are the results to be disseminated?
– The final draft, incorporating the comments, will be delivered through several channels: the big report will be accompanied by a lighter, more accessible book, as well as other medias such as internet, videos, documentaries.

The project also has an honorary advisory committee consisting of people who support the idea of the project. Their encouragements were instrumental in starting up the project since they are also the kind of people that the project want to reach. Being representatives for powerful institutions they might also become important in disseminating the results.

What would you personally hope to see as a result of the project and the report?
– We hope to influence two audiences: 1) our colleagues in social sciences, who should be encouraged to work more on the improvement of our institutions and become more relevant for policy; 2) political and social actors, from governments to grassroot organizations, who could be more effective and enlightened in their actions if they knew what social sciences know.

– My personal hope is that this report will make social sciences more useful and create a tradition of asking social sciences to shed some light on policy and institutional transformations. The dream is that this will not be a single report, but a series of reports. Of course, the ultimate goal of all participants is to contribute to improving people's lives over the world.

The report is to be finished after the summer of 2017 and be titled Rethinking society for the 21st century. Cutting-edge solutions to social, economic, political, and environmental challenges.

Read more about the project